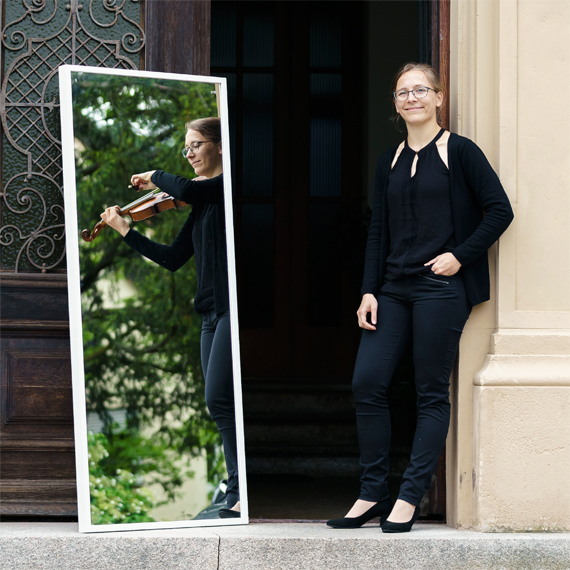 graduated in 2020 with a master’s degree in Historical Performance Practice on the baroque violin under the tutelage of Gottfried von der Goltz from the University of Music Freiburg. At the same place she completed before her studies in violin with Anne Katharina Schreiber and in music education, where she was among other subjects taught in classical singing, recorder and chamber music, and finished her studies in classical philology at the Albert-Ludwigs-University Freiburg as well.
Further inspiration she got from masterclasses such as the Ensemble-Akademie Freiburg, vielklang Tübingen, the Händel-Akademie Karlsruhe and the Corsi internationali della Musica Antica in Urbino from Susanne Scholz, Petra Müllejans, Enrico Gatti, and Melise Mellinger among others. She joined the Deutsche Händelsolisten as an academy member for the Internationale Händelfestspiele Karlsruhe. Among teaching pupils in playing the violin/alto and as a tutor in courses for young musicians, e. g. with the iam e. V., she works as musician in a variety of projects, mainly with Ancient Music and also with Contemporary Music, which lead her to a variety of projects in southern Germany and to the Collegium Novum Zürich/Ensemble Contrechamps Génève or to the Opéra de Dijon. With the Ensemble L’Éphémère she pursues her passion for chamber music from Early to High Baroque and as a member of Flauto Consort Freiburg, a recorder consort, often collaborating with percussion and chant, she regularly performs music of the Renaissance and the Early Baroque.